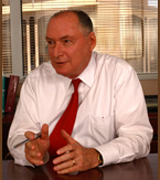 Mr. Maltz has practiced commercial and business litigation in our Tucson office for over 40 years. He is also a Fellow of the American College of Trial Lawyers and a Fellow of the International Academy of Trial Lawyers. According to the International Academy’s website, the organization is a group of elite trial lawyers representing both sides of the bar and including lawyers from over 30 countries. Fellowship is by invitation only.

Mr. Maltz moved to Arizona from New York City in 1976. He has made Tucson his home. He served as a commissioner and then a judge for Arizona’s State Boxing Commission. Of living and practicing law in Tucson Mr. Maltz says, “Can’t think of a better place to live or a better profession to keep learning.”  Read more about Gerald Maltz and his practice here.